Saw the new James Bond flick, Skyfall, last weekend. Not Casino Royale but a great Bond installment none the less. Being a student and lover of fine double guns, rifle or shotgun, the appearance of an English double rifle grabbed my attention. In the story, it was 007’s father’s hunting rifle sentimentally presented to him by the implausibly appearing gamekeeper from his childhood.  This is no rook rifle, the size of the bores confirm it is a stopping rifle. Bond Sr. would have turned Scottish foxes and  hare into smears of raspberry jam had he used it on them. I have fired big bore rifles like this before (.375 Holland & Holland – .458 Winchester Magnum). These rifles shake you to the core. An imprecise and random chiropractic adjustment with each pull of the trigger. Bond’s rifle has more voltage than those but 007 is such a stud that he pops bottles from a tree limb with it like he is shooting a Ruger 10/22. He also dispatches a bad guy shooting this cannon from the hip. Maybe since he lost his nuts in Royale this is no big deal. These cinematic liberties aside, it was great fun to watch.

A little internet research reveals that this beautiful rifle is an Anderson Wheeler boxlock in 500 Nitro Express. 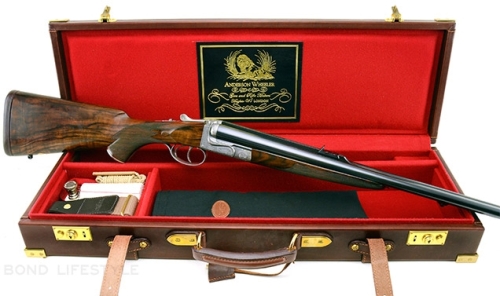 Not that I know everything about the English gun trade, but I have never, ever heard of Anderson Wheeler. Click HERE to check it out. The James Bond Lifestyle website says this thing can be custom ordered for $24K. WHAT? That is absurdly cheap. This, plus the fact that Anderson Wheeler has its own line of fragrances certainly gives me pause.