I was happily ignorant of this term a week and a half ago. I hope you never have reason to look it up.

A couple of weeks ago bird dog Rio was running at the dog park with her usual tail-wagging enthusiasm. I remember thinking how lean and athletic she looked, at the top of her game and ready for the next hunt of the season. Over the next few days her weight continued to drop and at some terrible point of sad demarcation she lost that ounce that took her from healthy-lean to skinny-sick. It took the vet about 10 seconds to find the mass around her spleen. The odds he gave us were not good – 2/3 chance of this being HSA which would take her life, 1/3 chance it being benign in which case removing her spleen and the mass would save her.

The 4 days until the surgery were a tough mix of  fear, anxiety and love. I wouldn’t trade those days but don’t want to relive them either. Rio was extraordinarily affectionate, wanting to be in your lap, to be petted, to be near. I don’t think she was in pain but you could tell she was uncomfortable and had some trouble breathing. All this time she had that sweet spark in her eyes, her tail wagging as she chased our Chihuahua Jack and at times not appearing sick at all. We were optimistic for a positive outcome the morning I took her in, working hard to suppress thoughts of this ending badly.  But the call was quick and clinical. The mass had spread to the lymph nodes and intestines. It was HSA, the odds had not been beat and Rio was “euthanized on the table”, as they put it.

I have never in my life felt such deep, exhausting grief and sadness (sorry Grandma & Grandpa). Common words like “gone”, “never again”, and “I’ll miss her” take on a terrible weight for a while. This is the time that the grace of God sees you though and I want to look forward to another puppy, to other hunts and happy days afield . . . but not yet. In due time. 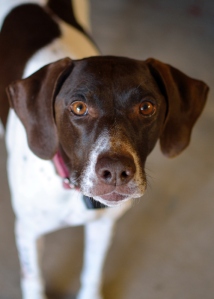 Good bye, Sweet Rio. 6 years, 8 months and 9 days was just not enough time with you.